**There will be no services in the evening**

Article about the Nativity from goarch.org 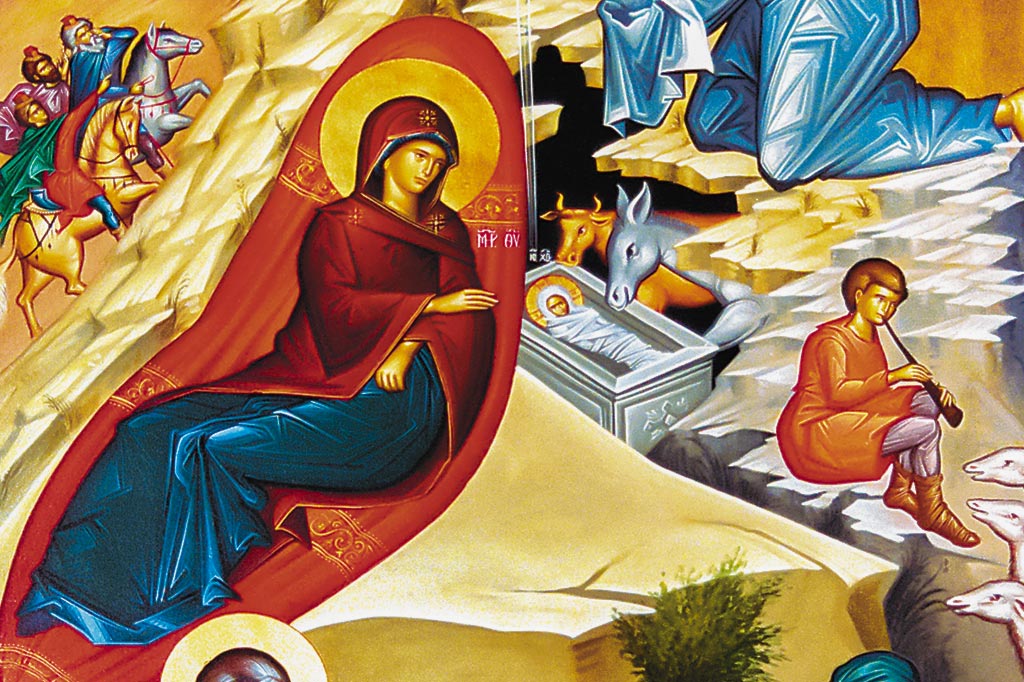 Introduction
The Feast of the Nativity of Jesus is one of the most joyful days of the Orthodox Church. It ranks next to the greatest holiday, the Resurrection of Jesus. The Feast of the Birth of Jesus is also known as the “Incarnation of Christ.” This means that Jesus became a man and came into the world to save us. We also refer to this joyous feast as Christmas.

Biblical Story
The story of the Nativity of Christ is beautifully told in the Holy Scriptures. The story is found in Matthew 1:18-25 and in Luke 2:1-20. No matter how often the Birth of Jesus is told, we realize that it is an important event.

As the story is told by the Apostles, the Roman Empire was powerful. The Romans had conquered much of the then known world. Judea and Samaria, what we know today as Israel, were included in their conquests. Emperor Augustus ordered that a census be taken in all his lands. He needed to know how many people lived in the empire so he could tax them. Everyone had to go to the town of their family’s origin to register for the census. This meant that Mary and Joseph had to go to Bethlehem. They were descendants of King David and Bethlehem was the City of David.

Mary and Joseph lived in Nazareth and it was a great distance from Bethlehem. It was about 100 miles over very rugged roads. Moreover, Mary was expecting the baby and it was almost time for her to give birth. Bethlehem was a small town and there were many descendants of David who had come to register for the census. By the time Mary and Joseph arrived in Bethlehem there was no place for them to stay. Joseph tried very hard to find a place to sleep that evening. There was no room at the inn. Finally, Joseph found a cave-like place where they could rest. This place was used by shepherds to protect their sheep in stormy weather. It was here that Mary gave birth to Jesus. The baby was wrapped in swaddling clothes and laid in the straw in the manger. 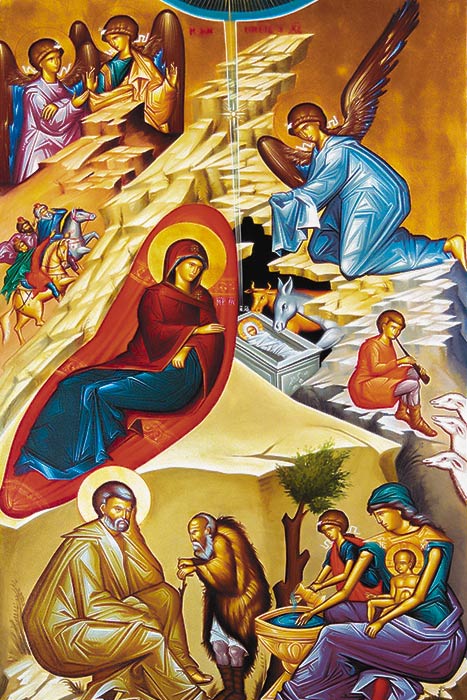 Now, that night the shepherds were out in the fields guarding their sheep. Suddenly, there was a bright light which startled the shepherds. The light was so bright that it turned the night into daylight. Of course, the shepherds were frightened. Nothing such as this had ever happened. Soon an angel appeared and calmed them. The angel said:

“Fear not for behold, I bring you good tidings of great joy, which shall be to all people. For unto you is born this day in the city of David a Savior; which is Christ the Lord. And this shall be a sign unto you: You shall find the babe wrapped in swaddling clothes, lying in a manger” (Luke 2:11-12).

Then a larger group of angels appeared. They praised and glorified God and sang, “Glory to God in the highest, and on earth peace, and good will toward men” (Luke 2:14). When the angels finished singing, they disappeared and the light began to fade. It became dimmer and dimmer until it was dark again. The shepherds were awed. They didn’t know what to do. Finally, they decided to leave their flocks of sheep and go to Bethlehem. They decided that they wanted to see for themselves what the angels had told them. When they got to Bethlehem, they found Mary, Joseph, and the infant Jesus. They fell to their knees and adored Jesus.

Some Wise Men came from the East for they knew of the coming of Jesus. They had seen a star that told them that a new king had been born to the Jews. They followed the star and were looking for the child. At this time the governor of Judea was King Herod. He was a wicked man and was feared and hated by the people. When Herod heard about the Wise Men looking for the child, he invited them to his palace. Herod asked the Wise Men to find the child so that he, too, could worship Him. But Herod was lying. He did not want anyone to take his place. The Wise Men went on to look for Jesus. The Star led them to Jesus and Mary. When the Wise Men found Jesus, they fell to their knees and worshipped Him. They gave Jesus gifts of gold, frankincense, and myrrh. The Wise Men left but did not return to Herod. They had a dream that warned them that Herod wanted to harm Jesus. Instead, they returned to their native country by a different route.

Icon of the Nativity
The icon of the Nativity tells the story of Christ’s birth from the Scriptures. It also shows that all creation is taking part in Christ’s birth. The angels give thanks with their song; the heavens give the star; the Wise Men give their gifts of gold, frankincense, and myrrh. The poor, humble shepherds give their praise and amazement; the earth gives the cave, and humanity gives the Virgin. 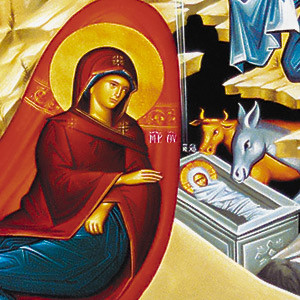 This Holy Icon is an icon with many scenes. First, it stresses the importance of the Theotokos, the Mother of Jesus. She is placed in the center and is the largest figure in the icon. In this icon, she is kneeling with crossed arms, looking at the Christ child. The three stars, denoting her virginity before, during, and after the Nativity, are on her garments. The Christ Child, in the center of the icon, is in swaddling clothes and is lying in the manger. In the background is the dark cave where He was born. In the cave are an ox and a donkey guarding the newborn Babe. Even though the Gospels say nothing of the cave, this information is from Holy Tradition. Neither do the Gospels speak of the ox and the donkey, but all icons of the Nativity include these animals. Including the animals in the icon fulfills the prophecy of Isaiah 1:3, “The ox knows his master, and the donkey his master’s crib; but Israel does not know me, and the people have not regarded me.” The long ray of light from the star points directly to the cave. This ray comes from the star and travels to all parts of the world. It teaches that this bright star is an astronomical happening, and is a messenger from heaven announcing the birth of Jesus. 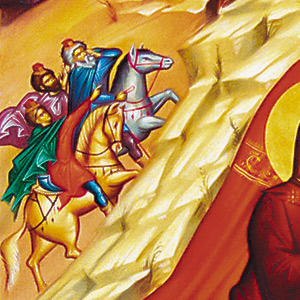 On the left hand side of the icon is another scene. The Wise Men, who were led by the star, are riding horses to bring their gifts of gold, frankincense, and myrrh to Jesus. The Wise Men are of various ages. One is without a beard. In those days, young men did not wear beards. The other Wise Man has long hair and a long beard, which indicates that he is much older. These details teach that regardless of age and appearance, the Good News was given to each and everyone.

Opposite the Wise Men is the scene with the humble shepherds. An angel proclaims the glad tidings. A young shepherd plays a reed instrument. This scene reveals that the music of the humans was added to the hymn of the angels. Across from the shepherd’s scene is the heavenly choir of angels. They are giving glory to God. The angels serve two purposes in the Nativity of Christ. They give glory to God and announce the good news to all mankind.

The background shows a very rugged terrain. This is not a true representation of the land in this area. Joseph could not find room in Bethlehem, so they went outside of Bethlehem to a cave. This rocky mountain formation only serves as a background for the event.

In the lower part of the icon are two more scenes. In the right hand corner are the two women Joseph brought to take care of the Christ child. They are bathing Him just as any baby is bathed. The humanity of Jesus is clearly shown in this setting. 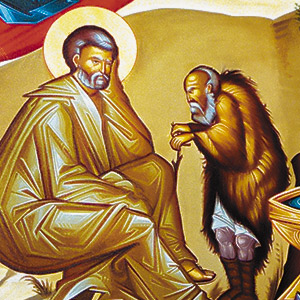 Opposite the bathing of Jesus scene sits a sad and worried Joseph. He is not part of the central group the Christ Child and the Theotokos. Joseph is not the natural father. Joseph is troubled and despondent. There is an old man talking to Joseph. The old man is Satan. Satan can appear in many forms. Here he is as an old man who is tempting Joseph and disturbing him. Satan is telling Joseph that virgin birth is impossible. He’s telling Joseph that he’s a fool if he believes this. This story comes to us from Holy Tradition. The sad Joseph shows us not only his personal predicament but the dilemma of all mankind the difficulty of accepting that which is “beyond words or reason.”

The tree, which is in the middle of the lower part of the icon, is a symbol of the Tree of Jesse. This tree refers to Isaiah 11:1-2, “But a shoot shall sprout from the stump of Jesse, and from his roots a bud shall blossom. The spirit of the Lord shall rest upon Him.” King David was often mentioned as the son of Jesse and Jesus was from the House of David.

The Holy Icon of the Nativity reminds one to praise and glorify the Birth of Christ. The celebration of Christmas each year serves to remind each and everyone of us that Christ came for you and me.

On the Sundays immediately before December 25, special commemorations emphasize the link between the Old Covenant and the New. On December 20 the Forefeast of the Nativity is commemorated, and the daily liturgical texts are directed toward the Feast itself. On Christmas Eve, services include the Great or Royal Hours, the Great Vespers, and the Liturgy of Saint Basil.

On Christmas Day the service commemorates the birth of Christ in Bethlehem, the adoration of the Shepherds, and the arrival of the Wise Men with their gifts. The service held on this day is the Liturgy of Saint John Chrysostom.

The days following Christmas are associated with the Theotokos and Joseph. December 26 is the Synaxis of the Mother of God, and the first Sunday after the Feast commemorates “Joseph the Betrothed.” December 29 commemorates the Massacre of the Innocents, and January 1 the Circumcision of our Lord. The Nativity season concludes on December 31, but the spirit of the festival extends to the celebration of Theophany (Epiphany), the feast commemorating the Baptism of our Lord in the Jordan River.

Focus On The Future: The Artist Behind Our Church Iconography Watch the Christmas Pageant 2017 Hosted by Sunday School

Join Us For Our 66th Annual Epiphany